A Thousand and One Nights 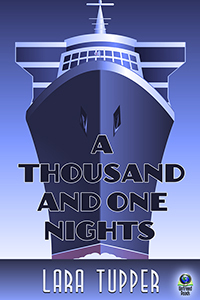 "An alternately hilarious and poignant look at the unsettled state of one young woman trying to make it outside the socially sanctioned college-office-marriage trajectory." Elle.com

For Karla, an Entertainer aboard the MS Sound of Music, the cruise ship life provides a welcome distraction from the insular, Maine town she left behind. Onboard she leads a surreal and shmaltzy existence (musical reviews by night, shuffleboard tournaments by day), interspersed by brief, romantic sojourns in Mediterranean ports of call with her newfound shipmate, Jack. When their ship contracts expire, neither is willing to go back home.

The pair decides instead to join musical forces and become a duo; they secure a series of contracts in the Middle and Far East and their adventures on land begin. Karla's sense of displacement is enhanced on solid ground, in complimentary hotel suites in Abu Dhabi, Dubai and Shanghai. She wears slinky dresses and learns as many pop songs as possible, and so begins her uneasy transformation to Lounge Singer Extraordinaire. Aware that she is becoming a disturbing cliché (peripatetic, twenty-something American trying to find herself), Karla tries not to let her anxiety overwhelm her. Jack, meanwhile, drinks more and looks at Karla less.

A Thousand and One Nights is about pursuing the wrong path, knowingly. It’s about bad lyrics and beautiful cocktail waitresses and a Mainer who wants to be a star and won't be. It’s about two people who are very much out of love and unwilling to make it official. It’s a story of covers and false fronts and what it does to a girl singer, over the course of nights and months and years, to fake it so well.

praise for A Thousand and One Nights:

“Wonderful and incisive, A Thousand and One Nights tells us in a new way what it means to be young and American. Tupper casts a keen, intelligent eye on the contemporary world, its multitude of fakeries and deceits, providing us with a witty, poignant, wholly worthwhile read.”— Pulitzer Prize winner Elizabeth Strout

“Lara Tupper has written an intriguing, often funny, and richly atmospheric novel that follows a young, hipper-than-that couple singing their same-old songs on cruise ships and in the luxury hotels of Abu Dhabi, Dubai, and Shanghai. It is sharply observed, fresh and authentic in its vision, poignant in its depiction of a couple’s willed façade, and great fun to read. Its keen-eyed view of the strange and cushioned world of entertainers makes for a one-of-a-kind book, fascinating and honest.” —National Book Critics Circle Award winner Joan Silber

“Cruise ship entertainers fall in and out of love as they take their act from the seas to exotic luxury hotels in Tupper's promising debut….Tupper proves herself a canny observer of the insular world of nomadic entertainers.” —Publishers Weekly

“A Thousand and One Nights presents us with a compelling tour of the ersatz, dismally funny, and faintly depressing world of the third tier entertainer: a tour that’s beautifully understated in its emotional intelligence, and wry and clear-eyed and psychologically astute in its portrait of a young couple for whom getting through the day means not facing what’s missing, whether from their act or their relationship. This is a moving and accomplished first novel.” —National Book Award finalist Jim Shepard

"Sometimes a novel's premise is so out there that it perversely manages to feel like real life, with all its stranger-than-fiction twists and turns. Such is the case with Lara Tupper's debut, A Thousand and One Nights, an alternately hilarious and poignant look at the unsettled state of one young woman trying to make it outside the socially sanctioned college-office-marriage trajectory….Both an off-kilter take on the conventional coming-of-age tale and a sly commentary on the underbelly of celebrity culture, this truly original book is basically uncategorizable—blissfully so."--Elle.com

"The Caribbean is only one stop on a long journey for the heroine of Lara Tupper's skilled debut…A Thousand and One Nights is also funny and insightful and told in prose as resilient as Karla's spirit. Keep an eye on Lara Tupper; she is sure to go far." --Rebecca Oppenheimer, Lifetimes.com., National Book Critics Circle member

“Lara Tupper’s novel is more than the story of one American woman’s journey through love, the world, and her twenties. It’s an exploration of adventure, desire, and thwarted ambition, one that will resonate with anyone who has ever left her comfort zone or time zone. By turns funny and somber, Tupper moves from the theme park cheeriness of cruise ship musicals to the dark bars of Dubai and Shanghai – with sharp sensibilities and a light touch.” —Rachel DeWoskin, author of Foreign Babes in Beijing: Behind the Scenes of a New China and Someday We Will Fly

"Add [this] title to your must-read list: 'A Thousand and One Nights' by Lara Tupper. --Allen Pierleoni, The Sacramento Bee

"NEW IN PAPERBACK: Karla and Jack are a romantic twosome aboard the MS Sound of Music, where they both are musicians…Publishers Weekly said that in this debut novel Tupper 'proves herself a canny observer of the insular world of nomadic entertainers.'" --Donna Marchetti, Cleveland Plain Dealer

“Lara Tupper's first novel is music to the ear. It's travel, too, full of dark corners and poignant wit, a rich international coming of age, boozy nights and friendship, love. And Tupper is a kind of women's Rick Moody, her heroine more or less enslaved on a cruise ship, singing in too heavy dresses, always making her way home.”—Bill Roorbach, author of Life Among Giants and The Girl of the Lake

“Lara Tupper’s debut novel… is an enchanting tale of disenchantment – both candid exposé, and quest for a truer self…The problem of living even half-honestly in a world of routine cheating and of faked performance is a real one, and gives [this novel] its vital center. Lara Tupper is a writer of many gifts, with a terrific story to tell.” —Judith Grossman, author of What Aliens Think

“A Thousand and One Nights lays bare the hopes and hearts of twenty-somethings yearning for success, adventure and love, and coming up just a little shy on all three counts. Their yearning is palpable, and Lara Tupper skillfully delineates their sadness and desires as they play out on three continents and in a host of less-romantic-than-they-initially-seemed exotic locales. A moving account of finding yourself amid the detritus of your dreams.” —CJ Hribal, author of The Company Car

“A clever tale of a young woman’s witty, dissolute, and sometimes desperate tryst with overseas stage-act fame, A Thousand and One Nights shines with the poignant honesty of a pop song singer who can’t quite get her life in key. Tupper has written a delightful first novel.”—Kim Ponders, author of The Last Blue Mile

"Few young writers can claim the wisdom to pen a novel in the voice of a storied alter ego. But Wesleyan University graduate Lara Tupper can." --David Scales, Middletown Press

"Lara Tupper...artfully infused her debut novel with lounge singing experiences, duo misadventures and tales of exotic locales….the behind the scenes look at shipboard life had me clawing for a Kleenex from snorting with laughter. Tupper’s literary ability is to use humor and sadness to tell a poignant tale of a doomed relationship while still remembering to wow you with little details along the way. You don’t have to be a lounge singer or even an entertainer to relate to the characters in A Thousand and One Nights….If you’ve ever worn a fake smile…you too might find yourself entrenched in Tupper’s book.” --Matidakay.com

LINKS to other works